What is the Definition of a Veteran?  I’ll tell you what they mean to me…

This is an open thank you to all veterans of all services in times of war and peace.

The men and women in our military have stood in the gap, and defended us since the inception of our country. They go into the fire when everyone else watches. It’s not a popular job. It’s not a glamorous job. It takes a lot of courage and perseverance and grit to face not only the horror of war, but the awful waiting, the endless drilling, and the boredom. These people have sacrificed their time with their families, their peace of mind, and sometimes their lives to protect us. They deserve our gratitude.

In small towns across this state there are memorials to the locals who have served in countless ways.   It has kindled the fires of appreciation for all the vets who’ve served, but also the families who share their parents, and children and siblings with us. 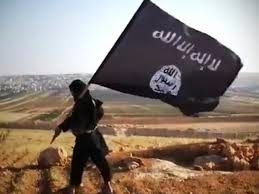 We get so busy with our everyday lives, we forget the soldiers who are protecting us all around the world. I don’t agree with many military decisions, but as long as there is a nation, there needs to be a strong military to defend her. We cannot please everyone. There are countries that do not disagree with our policies, they take offense at our very existence. The fact that we are a nation founded on christian principles offends them to their roots . No matter how appeasing or self deprecating some in this country may be in order to gain a form of peace, it is not real. The people who want us dead, may watch us pander, as an amusement, but our destruction is their goal. The toppling of the American government and the ruin of everything American is what they want. They will not be distracted from this goal. If you believe that you have achieved peace you are deceived.

As Americans, we offend many people. We have a reputation as a brash loud ignorant people. And sometimes we are. But we are also the biggest dog in every scrap, the only ones willing to call a spade a spade, and the only ones willing to put their money( and their military) where their mouth is. We won’t back down when things get tough. We won’t quit just because the polls say it isn’t popular. We are Americans. People call on us for help. Sometimes they appreciate the help. Sometimes helping bites us in the butt. But we are a nation founded on the belief that all men are created equal. And if someone is being oppressed, we want to help them. If caring too much is a crime, then we are guilty. 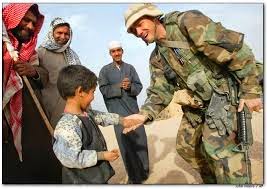 Our soldiers fight for peace everyday… in mud and sand and crap,they fight on. They fight bugs, and myths and boogiemen. They fight oppression and tyranny. They fight heat and cold. They fight fear and distrust. They fight years of misleading media. They fight loneliness and rejection. And ALL this they fight without raising a weapon. Their kindness, their presence, their skills, their generosity represents us in regions where they don’t know us. And yes soldiers die. But they die for a cause. They die because they KNOW they make a difference.

We live in a house on the hill. We have all the good things in the house, and talk about how safe we are ,how there are no bad men anymore. We are very enlightened. But at the foot of that hill stands a ring of soldiers. They have chosen to turn their backs on the comfort and security inside the house. They stand at the foot of the hill in the darkness. Their backs to the light of the house. Their faces to the darkness. They stand shoulder to shoulder around the base of our hill. They are out of our sight, but they still stand. They push back all enemies. Some are bloodied, some fall. But another moves up to take his brother’s place. While we sit in comfort, and discuss war, they live it. While we enjoy the fruits and the light, they endure on in darkness.

They don’t do this job because they have to. They do it because they are driven to protect and serve. If you brought every soldier home tomorrow, the same enemies he is fighting there,will be on our doorstep within a year.

Veterans  need our country to stand up and be proud of the forces that defend us from all enemies, both foreign and domestic. We all need to say

“Thank you and God Bless America!”